What is Parkinson’s disease

Parkinson’s disease is a progressive disorder of the nervous system that affects movement. It develops gradually, sometimes starting with a barely noticeable tremor in just one hand. But while a tremor may be the most well-known sign of Parkinson’s disease, the disorder also commonly causes stiffness or slowing of movement.

In the early stages of Parkinson’s disease, your face may show little or no expression, or your arms may not swing when you walk. Your speech may become soft or slurred. Parkinson’s disease symptoms worsen as your condition progresses over time. 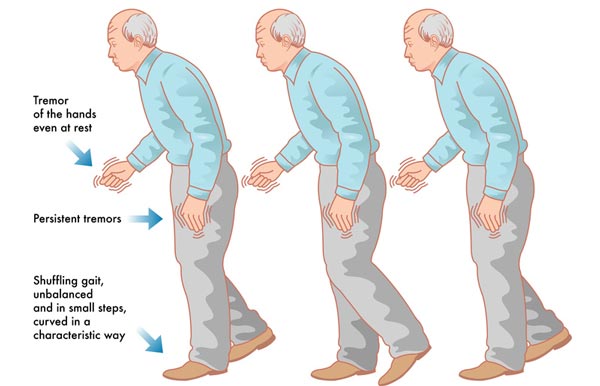 Parkinson’s disease symptoms and signs may vary from person to person. Early signs may be mild and may go unnoticed. Symptoms often begin on one side of your body and usually remain worse on that side, even after symptoms begin to affect both sides.

Parkinson’s signs and symptoms may include:

When to see a doctor

In Parkinson’s disease, certain nerve cells (neurons) in the brain gradually break down or die. Many of the symptoms are due to a loss of neurons that produce a chemical messenger in your brain called dopamine. When dopamine levels decrease, it causes abnormal brain activity, leading to signs of Parkinson’s disease.

The cause of Parkinson’s disease is unknown, but several factors appear to play a role, including:

Parkinson’s disease is often accompanied by these additional problems, which may be treatable:

You may also experience other emotional changes, such as fear, anxiety, or loss of motivation. Doctors may give you medications to treat these symptoms.

You may also experience:

f you’ve received a diagnosis of Parkinson’s disease, you’ll need to work closely with your doctor to find a treatment plan that offers you the greatest relief from symptoms with the fewest side effects. Certain lifestyle changes may also help make living with Parkinson’s disease easier.

A balanced diet also provides nutrients, such as omega-3 fatty acids, that may be beneficial for people with Parkinson’s disease.

Exercising may increase your muscle strength, flexibility, and balance. Exercise can also improve your well-being and reduce depression or anxiety.

Your doctor may suggest you work with a physical therapist to learn an exercise program that works for you. You may also try exercises such as walking, swimming, gardening, dancing, water aerobics or stretching.

Parkinson’s disease can disturb your sense of balance, making it difficult to walk with a normal gait. Exercise may improve your balance. These suggestions may also help:

In the later stages of the disease, you may fall more easily. In fact, you may be thrown off balance by just a small push or bump. The following suggestions may help:

Daily living activities — such as dressing, eating, bathing, and writing — can be difficult for people with Parkinson’s disease. An occupational therapist can show you techniques that make daily life easier.

Living with any chronic illness can be difficult, and it’s normal to feel angry, depressed or discouraged at times. Parkinson’s disease, in particular, can be profoundly frustrating, as walking, talking and even eating become more difficult and time-consuming.

Depression is common in people with Parkinson’s disease. But antidepressant medications can help ease the symptoms of depression, so talk with your doctor if you’re feeling persistently sad or hopeless.

Although friends and family can be your best allies, the understanding of people who know what you’re going through can be especially helpful. Support groups aren’t for everyone. However, for many people with Parkinson’s disease and their families, support groups can be a good resource for practical information about Parkinson’s disease.

Also, groups offer a place for you to find people who are going through similar situations and can support you.

To learn about support groups in your community, talk to your doctor, a Parkinson’s disease social worker or a local public health nurse. Or contact the National Parkinson Foundation or the American Parkinson Disease Association.

You and your family may also benefit from talking to a mental health professional (psychologist) or social worker trained in working with people who have chronic conditions.

Some research has shown that regular aerobic exercise may reduce the risk of Parkinson’s disease.

How to take care of a Bedridden Loved One?

Reach us on WhatsApp